A cost-effective, environmentally superior alternative to the Twin Tunnels
1.1 million acre feet  of NEW WATER for California annually*
No damage to Delta farms or fisheries

Three organizations from Northern and Southern California have joined together to present a cost-effective, technically feasible, and environmentally sound water plan that benefits all Californians. Unlike the Twin Tunnels, the Delta-Tulare Water Plan provides new water for urban centers and agriculture without damaging Delta farms and fisheries. And, it delivers new water at a fraction of the cost of the Twin Tunnels.

What is the Delta-Tulare Water Plan?

Currently, most of California’s surface water is captured and stored in Northern California in the winter, then pumped south in summer. The disadvantage of this system is that by pumping when flows are naturally low, saltwater intrusion and reverse flows are more likely to occur in the Delta. The Delta-Tulare Water Plan reverses this paradigm. Because it utilizes storage in the south, water can be pumped south in the winter, when flows and water quality are high. Instead of water going out to sea during high flow events, the water can be captured and conveyed to Tulare Lake for re-distribution and groundwater recharge.

Why conveyance in the West Delta?

Fresh water is the lifeblood of Delta agriculture and the Delta ecosystem. Without adequate flows to keep saltwater out, Delta fisheries suffer and water becomes too salty for irrigation. One of the biggest flaws in the Twin Tunnels plan is the placement of intakes – and diversion of the Sacramento River – at the top of the Delta system, depriving the Delta of the freshwater flows it needs.
Sherman Island in the West Delta is the ideal location for new water intakes and conveyance because it allows water to flow through the Delta before being captured and sent south. Sherman Island is already 90% owned by the State of California, so there is no impact on farms or homes (unlike the Twin Tunnels, which requires the sacrifice of 300 Delta farms and homes.) There are already several proposals for West Delta intakes and conveyance systems, including proposals by Dr. Robert Pyke and SolAgra. What is needed now is a feasibility study to evaluate the technical, financial and environmental merits of these and other proposals.

Why Tulare Lake Basin for water storage and distribution?

At 25 million acre feet, the historical Tulare Lake was the largest natural freshwater lake west of the Mississippi. When California agriculture began to develop, the lake was drained and became farmland. Today, the Tulare Lake region has a robust array of canals that (with some infrastructure enhancement and cooperation of landowners) could be used to store and re-distribute water.

In addition to providing water for agricultural and urban use, water stored at Tulare Lake can be used to recharge depleted aquifers in the region. In wet years especially, water can be moved out of Tulare Lake to recharge stations, then the Tulare Lake water replenished by water captured in the West Delta.

A cost-effective plan that builds upon existing infrastructure

The Twin Tunnels are expected to cost upwards of $50 billion, including interest. And this sobering price tag does not include the inevitable cost overruns.
The Delta-Tulare plan would cost far less. New intakes and conveyance in the West Delta would cost a fraction of the Tunnels plan, and most of the distribution canals needed in the Tulare Lake area already exist.

Reoperations and capture of flows

With West Delta conveyance in position, the capture of excess flows through reoperations and timing is greatly enhanced.  Fresh water flows of a higher quality for the benefit of agriculture, urban use and the environment become much more abundant and reliable.  The “smoothing” of water supply versus water demand can be performed on a real-time basis. South of Delta deliveries can be performed with less saltwater intrusion (X2) beyond Sherman Island. More water and of a higher quality could be reliably available for all users. 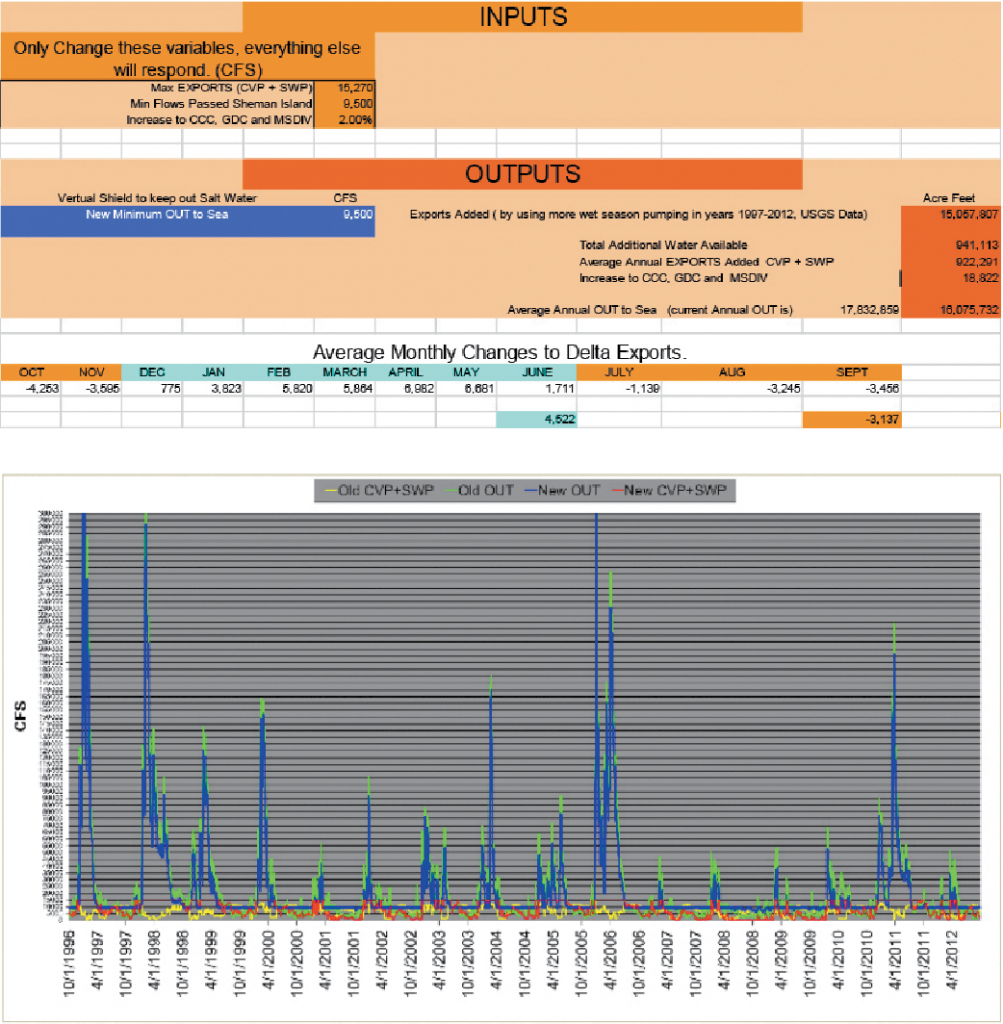 The people of California want our elected officials and policymakers to take a more reasoned approach to our water resource challenges – one that does not pit north vs. south, or agriculture vs. urban interests vs. the environment. North Delta CARES, Citizens Water Plan of Southern California, and the San Joaquin Valley Leadership Forum urge our leaders to take the next steps on the Delta-Tulare Water Plan.

Let’s work together to make this plan a reality!

* On average, based on 43 years of flow data. Less water would be available in dry years, but significantly more water could be captured in wet years.