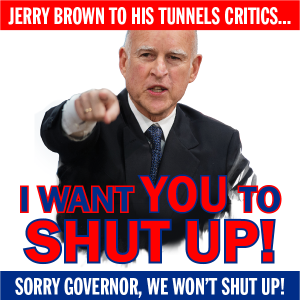 The Governor is using the drought executive authority for California’s largest water/land heist!

Governor Jerry Brown has declared CA to be in a state of emergency due to “conditions of extreme peril to the persons and property in CA due to water shortage and drought conditions with which local authority is unable to cope.” (Govt. Code 8558b)

With this Executive Order, all water use will be under scrutiny by the State Water Board, and the Governor has complete authority and the right to exercise all police power vested in the State. (Govt. Code 8627)

EO-29: “The Department [DWR] is directed to enter into agreements with landowners for the purposes of planning and installation of the Emergency Drought Barriers in 2015… Where the Department is unable to reach an agreement with landowners, the Department may exercise the full authority of Gov. Code Section 8572.” This code states, “The Governor is authorized to commandeer or utilize any private property or personnel deemed by him necessary in carrying out the responsibilities hereby vested in him as Chief Executive of the state and the state shall pay the reasonable value thereof.” (Govt. Code 8572)

Governor Brown declared that when access (to private property) is not granted by a property owner, the Water Board may use an inspection warrant… any person who refuses to permit an inspection of their property is guilty of a misdemeanor (Code of Civil Procedure, Section 1822.50 to 1822.60)

EO-21: “The Water Board and the DFW shall immediately consider any necessary regulatory approvals for the purpose of installation of the Emergency Drought Salinity Barriers.” EO-27 suspends the Delta Plan for the purpose of carrying out the emergency drought salinity barriers (EO directives 20 and 21). EO-26 suspends CEQA (California Environmental Quality Act) for purposes of carrying out the directives in the Executive Order.

No State, Regional, or Public Agency may deny transfer of water by a water conveyance facility which has unused capacity for which that capacity is available (Water Code 1810). Regarding environmental effects of private projects, the Legislature declares that “in the effect specific economic, social, or other conditions make infeasible such projects alternatives or such mitigation measures, individual projects may be approved in spite of one or more significant effects thereof.” (Public Resources Code 21002)